MSG KIT OUT NATIONAL COUNTIES IN THE EUROPEAN CHAMPIONSHIP

The National Counties representing England at the Dream 11 European Championship.

The NCCA partnered with MSG to kit the England players and staff with Macron Teamwear.

National Counties XI won the Dream11 European Championship by beating Belgium by ten wickets in the final at the Cartama Oval in Malaga.

National Counties, who represented England in the 15-nation T10 tournament, had earlier beaten Belgium by three wickets in a last ball thriller in the play-off match that secured their place in the final. 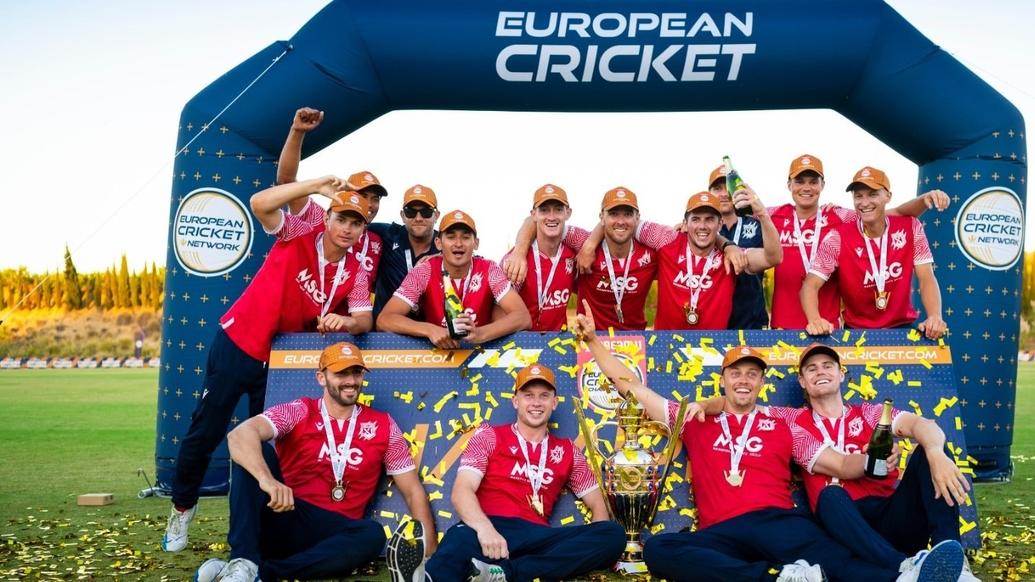 The hosts Spain exited early on Friday morning as their three-game winning run ended against the Netherlands in the Eliminator.

Next up, England edged directly into the Final with a thrilling last-ball win over Belgium after a massive last over drama.

Belgium bounced back to beat the Netherlands in Qualifier 2 to set up another meeting with the very well-supported England side in the much-anticipated final.

The big-hitting Belgians blasted their way to an imposing 148 with Ali Raza (43) and Sherry Butt (54) doing the most damage. Butt was particularly brutal, hitting eight massive sixes in his 18-ball innings.

But England had no trouble chasing down the target with Sussex star Harrison Ward and skipper Dan Lincoln showing the way with some venomous hitting in their unbeaten fifties.

England XI is represented by the 20 Counties taking part in the competitions of the National Counties Cricket Association under the auspices of the England and Wales Cricket Board.

With a talented mix of Under 19, National Counties, former and current County players, England XI have keenly assembled for the Dream11 European Cricket Championshipalongside Finland, Italy, Germany and Czech Republic in Group C. The team also includes Wales captain Sam Pearce, who played for Glamorgan in the T20 Blast this summer.

Expertly led by Dan Lincoln, who scored a magnificent ton in the Group C Final against Italy, England XI will be favourites for the inaugural Dream11 European Cricket Championship crown.

Harrison Ward, the talented left-handed opener caught the eye for England XI on the opening day of Group C action. The 21-year-old steadied the ship as England got the better of old foe Germany, recovering from a precarious 18-4 chasing 56 to win with the Sussex County player Ward seeing England home with 41 off 18 balls. In the final game of the day, England cruised home against Finland with Ward again in the runs with 40 off 12 balls as the Group C favourites eased home with 38 balls to spare in the novel T10 format.

Sam Pearce, Wales captain and bowling all-rounder, he represented Glamorgan in the T20 Blast this summer and Royal London One Day Cup. Pearce also led Wales to the semi-finals of the NCCA fifty-overs competition this summer. Made a solid start with the ball against Finland on the opening day. At the end of the group stages, he was the second-highest wicket-taker in ECC21 with 15 wickets at an average of 8.53.

Dan Lincoln, skipper, wicketkeeper and a former professional footballer with Reading FC, he has played for Glamorgan and Kent in the last two years in county cricket and brings experience to this young side. The main man in the Group C Final with a tremendous century against Italy. He finished as the third-highest run-scorer in the group stage of ECC21.